Investing in gold is the best ‘speculative’ bet there is today 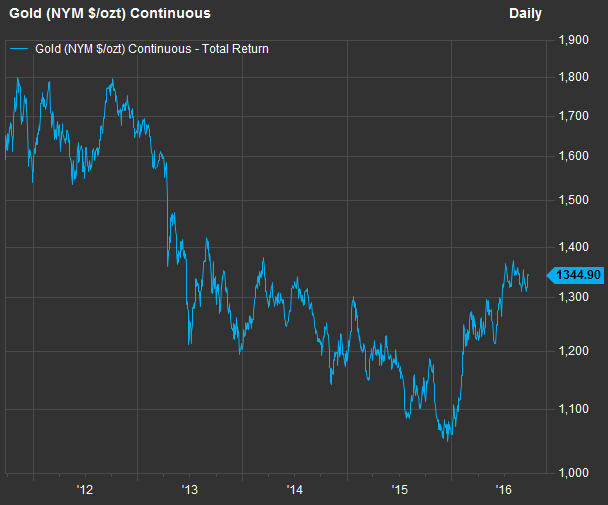 Investing in gold is the best ‘speculative’ bet there is today

I am a big believer in the barbell approach to investing. That is, I have a big portion of my money in sleepy index funds, and buy-and-hold dividend payers and value plays, and a smaller portion in rip-roaring trades that I hope work out in short order.

And one admittedly risky trade that could pay off big-time in the coming months is to go heavily into gold.

Now, first, a disclaimer: I have written regularly about the pros and cons of buying gold at certain moments in time, and always try to stress that I am agnostic about the precious metal. I think it’s preposterous to presume that gold is a “safe haven” given its incredibly volatile price history; gold is down roughly 30% from its peak about five years ago even as the S&P 500 SPX, -0.18% has surged about 85%. But at the same time, I think it’s ludicrous to write off gold as some tinfoil-hat investment or an all-out gamble akin to investing in microcap stocks.

Gold, simply put, is an investment. And I try to view it as such, based on the current macro and market conditions.

It’s moderately risky as far as investments go, sure. But anyone who tries to paint the precious metal as a bulwark against disaster or a pitfall to be perpetually avoided is missing a key piece of the market puzzle.

Because through the end of 2016 and into the start of 2017, gold could be poised for a big leg up even as stocks risk running out of gas.

If you think gold is risky, you’re right. But there is no risk-free return in any market, especially in this one. So here’s why you should consider gold if you’re leery of stocks or the bond market right now:

The Federal Reserve
It’s not just the lack of a rate increase. The details of the Federal Open Market Committee statement Sept. 21 showed investors more proof that the projection for future rate increases is flattening out significantly. I have made the argument that the so-called “dot plot” from the Federal Reserve is naively aggressive, pointing in particular to the June 2015 FOMC that predicted a 1.625% federal funds rate by the end of 2016 and a laughable 2.875% by 2017’s end. Clearly, Janet Yellen & Co. are not even close to getting serious about tightening, which could weigh on the dollar and stoke inflation — two things that are good for gold.

Risk appetite
Of course, the Fed was in a “damned if you do, damned if you don’t” position. If they raise rates, some investors would be afraid of the impact on stocks, particularly overbought income plays like utilities. But they didn’t, and now some are afraid the recovery isn’t as rosy as some have been led to believe.

Worse, as Rex Nutting pointed out, there is a risk the Fed is already behind the curve if it is simply making decisions based on not seeing the economy “overheating now.” It all adds up to a lot of uncertainty about what’s next for stocks, the bond market and just about everything else … and uncertainty tends to drive investors into gold.

Big investors like gold
I’m not talking about folks like Jim Grant here, who was bullish on gold all the way down from its peak and only now seems to be on the right side of the trade. I’m talking folks like commodities legend Jim Rogers, who was pretty much spot-on with a very bearish view for gold during its 2013 meltdown. Rogers recently sat down with Barron’s and said: “Before this is over, gold is going to go through the roof and could turn into its own bubble.”

Others have made similar, but less dramatic, calls to the upside; the head of gold investing at State Street Global Advisors recently put a $1,400 target on gold for year’s end, another 4% upside from here; UBS increased its short-term target to $1,400 for gold this summer before the Fed’s non-hike news; and Bank of America Merrill Lynch was out with a $1,500 short-term target around the same time. When everyone is this bullish, take notice.

The charts
If you want a measure of investor supply and demand, look no further than the charts. Gold price charts look like they are turning around after being mired in a holding pattern for the past few months. Without getting too jargony, price action after the Fed decision gave short-term price averages a big boost to result in some favorable upside momentum. We’ll have to see if those trends last, but a 2% pop in gold prices in roughly a week around the FOMC hints that this trend isn’t breaking down.

Of course, so much of the aforementioned factors have as much to do with the dollar as they do with gold itself. Since the Fed’s first rate hike back in December, the dollar has largely moved lower, save for a few bumps, such as the one in late June around the Brexit vote. If the Fed does get surprisingly hawkish in the coming weeks or stuns the world with a November rate increase, all bets are off. Same for moves that could dramatically weaken peer currencies to the dollar, such as the yen or euro.

But it’s incredibly unlikely Yellen is crazy enough to lift rates a week before the presidential election, and currencies like the yen and the euro have marched relentlessly higher versus the dollar despite obvious challenges in both regions. Never say never, of course, but it seems the trend for the dollar will be flat or even lower in the coming weeks. That will be good for gold.