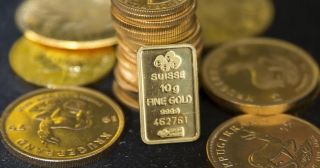 Gold, and its brother silver, have always been the basis of money, back to the beginnings of “money,” in the late fourth millennium B.C. Already by 2000 B.C., gold and silver had been “money” for over a thousand years – the entire history of “civilization” on this planet. Gold was still the basis of money in the 1960s, in an unbroken line stretching back to the beginnings of history.

One somewhat counterintuitive requirement for “money” is that it does not have a utilitarian purpose; at least, not one whose value is comparable to its money value. If there was some utilitarian use for gold, it would be used up, consumed, and thus disappear – not what you want to happen to your money. Ancient China actually had quite a lot of difficulty with this: their copper coinage sometimes disappeared to make farm tools. This is true today of paper money as well: if its worth as paper was more than its worth as money, it would be used up and consumed. This actually happens from time to time, when hyperinflated banknotes become wallpaper and furnace fuel.

The World Gold Council estimated that global mining supply in 2015 was3,186 metric tons of gold. Industrial demand (not including jewelry) amounted to 331 tons, including 263 tons for electronics, 48.6 tons for other industrial uses, and 18.9 tons for dentistry, which I consider a form of jewelry. Some of this industrial use is later recycled, including about 54 tonsfrom electronics in 2015.

Gold is “scarce” in the sense that it is hard to find, and available in very low concentrations, which means that you have to process a large amount of rock to get it. The resulting high production cost is the ultimate reason for gold’s high value. However, in terms of availability, it is very plentiful. We actually have twice as much aboveground gold today as when the world left the gold standard in 1971. We have seven times more than in 1910, the era of the “Classical Gold Standard.” We have about fifty times a year’s mine production.

To the qualities which originally recommended them [gold and silver], another came to be added, the importance of which only unfolded itself by degrees. Of all commodities they are among the least influenced by any of the causes which produce fluctuations of value. … [N]o commodities are so little exposed to causes of variation. They fluctuate less than almost any other things in their cost of production. And from their durability, the total quantity in existence is at all times so great in proportion to the annual supply, that the effect on value even of a change in the cost of production is not sudden: a very long time being required to diminish materially the quantity in existence, and even to increase it very greatly not being a rapid process. Gold and silver, therefore, are more fit than any other commodity to be the subject of engagements for receiving or paying a given quantity at some distant period.

The situation for copper, on the other hand, is the complete opposite. Copper goes from smelter to factory as quickly as possible, incurring the least possible storage expenses along the way. Known inventories on major exchanges are only 4% of annual mine supply – a two-week supply. This copper has a market value of approximately $3.2 billion. The aboveground supply of gold, on the other hand, is worth about $7.7 trillion, or 2400 times more. The world’s inventory of wheat in storage is worth about $36 billion, and is about 19% of annual world production. (This has interesting implications for “commodity basket” currency notions.)

It is easy to see that “supply and demand” issues that affect copper and wheat have no effect on gold. You could double the annual mine supply, or cut it in half, with little overall effect.

Or, as the great fourteenth-century Arab genius Ibn Khaldun said:

And God created the two precious metals, gold and silver, to serve as the measure of value of all commodities. … For other goods are subject to the fluctuations of the market, from which they are immune.

Thus gold becomes the best measure of stability in monetary value. Certainly nobody — including Mill – argued that gold’s performance in this role was perfect. But, after centuries of experience, we can say that gold’s deviation from this perfect ideal was minor enough that it didn’t matter much. It was good enough that there was no need to find something better, even if one could, which nobody ever has.

The “problem with gold” today is not that it has somehow failed in its role as a measure of stable value. The “problem” is that many people no longer want their money to be stable in value. They want to play games with it. This is true of today’s seat-of-the-pants central bankers, and also those whose “rules-based” systems are not aimed at achieving a stable monetary value at all.

This is a self-defeating game – self-defeating for the people as a whole, at least, although it can be very advantageous for the elites, both in terms of profit and political influence.

When you see that gold is simply a measure of value, you don’t have to pile it up in vaults. There is always enough. Indeed, it is gold’s abundance – the accumulation over decades and centuries – that helps it serve its role. John Stuart Mill understood this 170 years ago. We might do well to remember it today, as a “return to normalcy” for our current monetary arrangements seems to slip further and further away.
Credits