Pound Drops to Lowest Since 1985 as Angst Builds Over Brexit 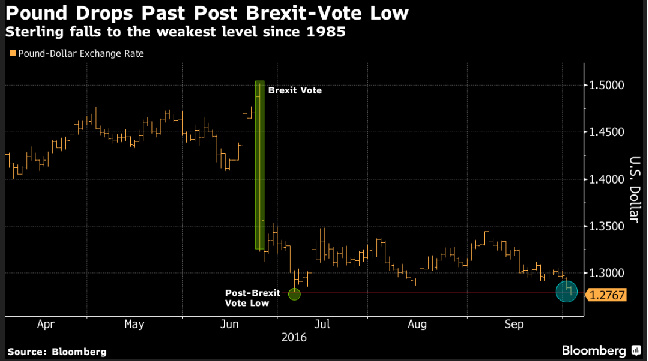 Pound Drops to Lowest Since 1985 as Angst Builds Over Brexit

The pound tumbled to its lowest level in three decades amid mounting concern the U.K. is heading for a so-called hard Brexit that would restrict access to the European Union’s single market.

Sterling exceeded its lows versus the dollar set in the wake of the June 23 referendum and touched the weakest in three years against the euro. The slide extended as Prime Minister Theresa May was said to take the view that financial services would get no special favors in EU exit talks. The pound has fallen against all 16 of its major peers since the premier’s weekend announcement that she’ll trigger the formal process for quitting by March.

“We have the market facing the reality that Brexit is about to begin and we could be faced with hard Brexit,” said Jane Foley, a senior currency strategist at Rabobank International in London. The reports about the financial sector are “just lacing the concerns the market already has about the outlook for growth, investment and jobs in the U.K. economy.”

The Bloomberg British Pound Index, which measures sterling against other major currencies, has fallen more than 1 percent this week to the lowest since the gauge began in 2004.

Options prices suggest further losses for the pound through year-end. The premium on three-month contracts to sell sterling versus the dollar, over those to buy, widened to 1.4 percentage points, risk-reversals data compiled by Bloomberg show. That suggests the most bearish pound sentiment since late July.

Sterling will end the year little changed at $1.28, according to the median estimate in a Bloomberg survey. Some see it going much lower, though, with four forecasters — including HSBC Holdings Plc, Europe’s biggest bank — predicting a drop to $1.20.

The U.K. currency has already slumped 14 percent since the British people voted to quit the EU, and just completed its worst quarterly run of losses since 1984, with five straight declines.

While sterling’s weakness has become a focus of politicians who opposed the “Leave” referendum campaign, it’s not necessarily bad news for everyone. The lower exchange rate will cushion the economy by helping exporters, and the currency’s losses this week have buoyed the FTSE 100 Index of stocks, which surpassed 7,000 for the first time in 16 months.

It should also help the Bank of England achieve its goal of faster inflation. The 10-year break-even rate, a bond-market gauge of expectations for prices over the next decade,climbed to the highest since the middle of last year.

Selling the pound has accelerated since the first day of the ruling Conservative Party’s annual conference on Sunday, when Prime Minister May promised to curb immigration and set a date for Britain to trigger Article 50, which starts a two-year withdrawal process from the EU. While that removed one source of doubt that’s been hanging over U.K. businesses, the premier failed to provide much clarity on what leaving the EU will actually look like.

May’s reported refusal to prioritize the protection of the financial industry is only increasing concern among currency traders that the government will compromise on economic protections in order to gain control over immigration.