What Lies Ahead For Gold Miners (GDX)?

What Lies Ahead For Gold Miners (GDX)?

From Jordan Roy-Byrne: In recent weeks both metals and miners have declined somewhat sharply after reaching resistance. Gold peaked just below major resistance near $1375/oz and GDX, the biggest ETF for gold miners peaked at its October 2016 and February 2017 highs.

If precious metals can break through this resistance then a major move higher would begin. However, the recent selloff, coupled with a lack of relative strength suggests the road to a breakout could lead well into 2018.

On the daily chart shown below, we can see that Gold has retreated after testing important trendline resistance. Although Gold’s long-term technical structure leans bullish, Gold is currently showing relative weakness. Gold against foreign currencies (Gold/FC) did not make a higher high and Gold/Stocks barely made a higher high. Both ratios may need to hold their blue support lines in order for Gold to remain above $1260/oz. 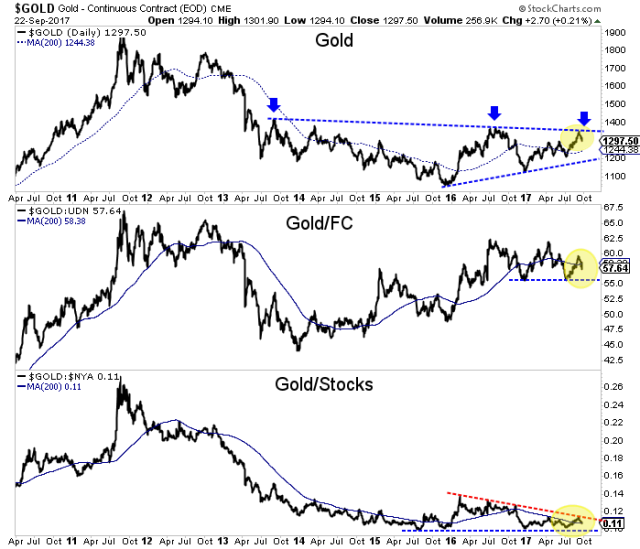 Turning to the stocks, we see that GDX, like Gold was turned back at major resistance. GDX has now tested $25-$26 three times in the past year. On a clean break above that resistance, GDX should retest its 2016 high. It has key support above $22 and at $21. GDXJ will not gain any momentum until it breaks above the September high around $37.50. It has support at $31 and $32. 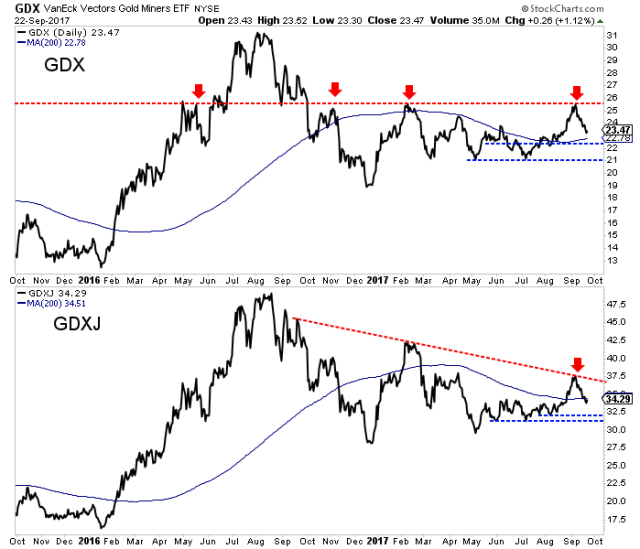 There are two things that concern us with respect to the medium term outlook. The precious metals complex did not surpass its 2016 highs even though the US Dollar index made a new low. That is a negative divergence. Secondly, both miners and metals have formed a bearish reversal on the monthly charts. That is more significant than a daily or weekly reversal.

While Gold could eventually be headed for a major breakout (potentially in 2018) the road ahead could be difficult. A breakout anytime soon is unlikely. The relative weakness of the sector in the face of a weak US Dollar and the inability to hold gains into the end of the quarter suggests that Gold and gold stocks will remain mired in their long-term bottoming patterns. As we noted several weeks ago, we want to continue to accumulate the best opportunities in juniors on weakness. That is what we have done since last December and it has served us well.

GDX currently has an ETF Daily News SMART Grade of C (Neutral), and is ranked #18 of 36 ETFs in the Precious Metals ETFs category.

This article is brought to you courtesy of The Daily Gold.