The incredible rise of China and India, in two GIFs 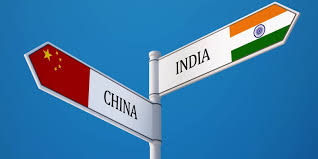 The incredible rise of China and India, in two GIFs

You won’t be able to tell the story of the 21st century without India and China as its main protagonists. Just look at the numbers. The world’s two most populous nations are poised to get even larger, but while their economies were in the doldrums for much of the 20th century, they are soaring now.

These two animated charts, published earlier this year by Swedish data-visualization designer Aron Strandberg, show China’s and India’s economic growth from the 1970s to their predicted levels in 2030. Neither appear in the world’s top economies in the chart until the 1990s, when China first emerges as a tiny blip and then zooms up the chart past Europe’s traditional economic titans and Japan. India jumps into the frame by the late 2000s. By the end of the next decade, China and India, along with the United States, will rank as the world’s top three economies.

The Asian giants were burdened by a legacy of Western imperial rule and meddling. Then, they made their own missteps, stumbling through a half-century of sclerotic socialism and traumatic Maoism, respectively. China’s opening up of its economy under Deng Xiaoping in the 1980s and India’s landmark reforms in the early 1990s set the stage for the nations’ return as key global players. This includes the rise of hundreds of millions of people out of poverty. At the same time, China and India remain at the heart of profound global challenges: Both nations are grappling with the disastrous effects their economic ascent is having on the environment and will also account for some of Asia’s most staggering rates of income inequality.