Stocks are selling off after the Barcelona attack 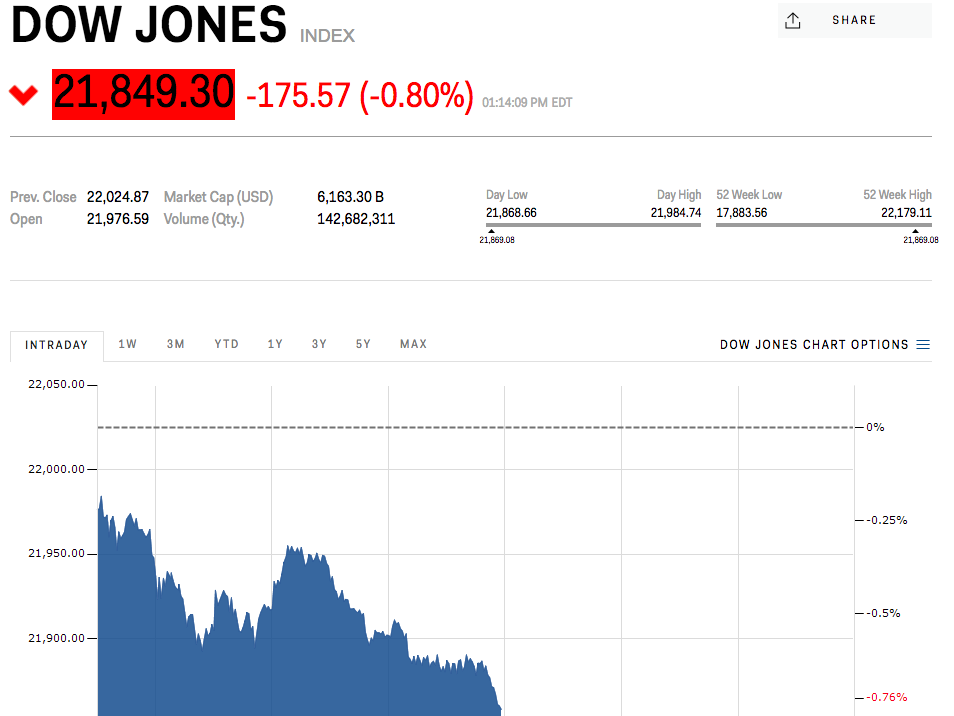 Stocks are selling off after the Barcelona attack

U.S. and European equities fell on Thursday as investors trimmed their exposure to riskier assets amid ongoing uncertainty over whether the Trump administration will be able to proceed with its economic agenda and after cautious tones from U.S. and European central banks.

U.S. stocks hit session lows and the dollar turned flat after reports that a van crashed into dozens of people in the center of Barcelona, killing at least 13 people, according to local media.

U.S. Treasury yields were little changed, moving in a tight range on renewed skepticism U.S. President Donald Trump will be able to implement his economic plans even as the White House knocked down speculation that Gary Cohn, director of the National Economic Council, would resign.

The departure of business executives from Trump’s advisory councils on Wednesday fueled speculation of an exodus of other officials, such as Cohn, after Trump blamed counter-protesters as well white nationalists for clashes last weekend in Charlottesville, Virginia, that left one woman dead.

Earlier on Thursday, the dollar was pushed higher versus the euro after the European Central Bank expressed caution about removing monetary stimulus too soon following a recent bounce in the euro, according to records of its last meeting.

This was a day after minutes released from the Federal Reserve showed some policymakers cautioning against rate increases while U.S. inflation remained weak.

While investors should not have been surprised by the Fed minutes, said Peter Costa, president of Empire Executions Inc, they have a lot of worries, including negativity out of Washington and the pending exhaustion of the U.S. Treasury’s borrowing capacity – known as the “debt ceiling.”

“There’s a lot of little things weighing on people’s minds and it makes for a quicker decision to get out,” said Costa.

“People are becoming a little more skeptical about market valuations. Even though the economy is doing fairly well and you’ve a host of positives, people get a little nervous when you get close to long-term highs.”

The dollar index <.DXY> rose 0.06 percent, with the euro <EUR=> down 0.22 percent to $1.1742, after hitting a three-week low following news of concern about its gains from within the ECB.

“The reality is the ECB is definitely more concerned than the market gave it credit for,” said Simon Derrick, chief market analyst with Bank of New York Mellon in London. He added that further downward pressure on the euro is “entirely possible.”

The Stoxx 600 <.STOXX> index was down 0.59 percent, snapping a three-day winning streak.

Oil prices rose on expectations of a hefty stockpile draw at the U.S. oil storage hub at Cushing, Oklahoma, reversing Wednesday’s loses, which were spurred by data showing U.S. crude output at its highest in two years. [nL4N1L3242]