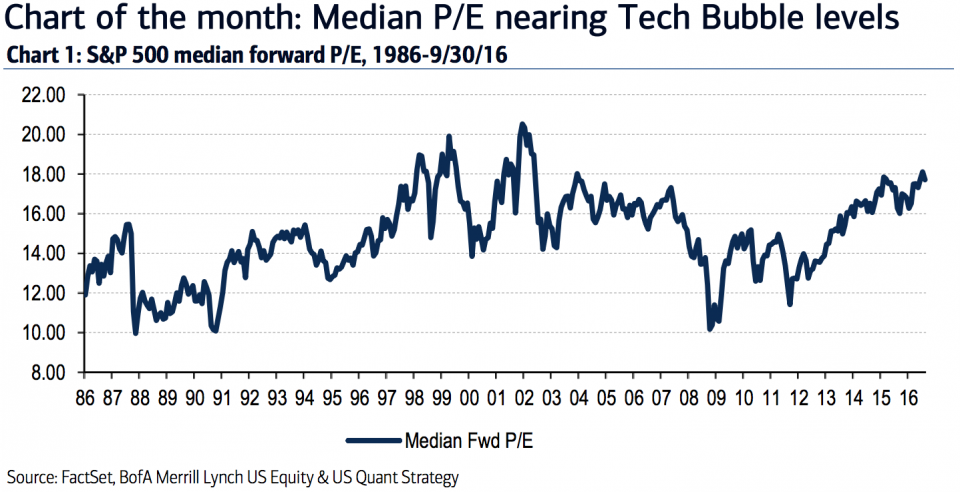 Bank of America Merrill Lynch is joining the chorus of strategists on Wall Street who are warning that the stock market is expensive.

Savita Subramanian, an equity strategist at the bank, pointed to the median of the price-to-earnings ratio, which measures whether company stocks are fairly valued in relation to their earnings, for the stocks in the S&P 500 index.

“The S&P 500 median P/E is currently at its highest levels since 2001 and suggests that the average stock trades a full multiple point higher than the oft-quoted aggregate P/E,” she wrote in a note on Tuesday.

Stocks are considered expensive because the median P/E ratio is well above its historical average, indicating higher prices than are justified by the underlying earnings-based value of the companies.

“This puts it in the 91st percentile of its own history and just 14% from its Tech Bubble peak,” she said. The Nasdaq crashed nearly 80% beginning early in 2000 after tech-company valuations rose to levels far above their real value. Subramanian said the stocks most responsible for pulling up the P/E ratio were mid-caps, with the median stock in this category trading at the 92nd percentile of its history.

Mega-caps, or companies that are worth more than $100 billion in market capitalization, are trading well below their valuations at the height of the tech bubble and are keeping overall valuations somewhat contained. That’s why Subramanian also advised clients to “move up the cap spectrum.”

But it’s not just the price-to-earnings ratio that’s flashing a warning light. Subramanian included the table below, which shows that more than a dozen measures of the market’s valuation are trading above their historical average:

The lavish cost of stocks is a favorite go-to for naysayers who think an end to the seven-year bull market for stocks is imminent. Against many odds, the S&P 500 rallied to all-time highs this year, bouncing back from its worst-ever start to a year.

Even though stocks are trading at a premium, Subramanian argued that bonds are more expensive.

Investors chose the US over other developed markets to buy government bonds as interest rates elsewhere fell near or below zero. That demand raised the prices of bonds and drove down the yields on Treasurys.

“Relative to other asset classes, the case for stocks is most compelling vs. bonds, where the risk premium remains elevated and the S&P 500 dividend yield trades near a 60 yr high vs. the 10 yr Treasury yield,” Subramanian said.