Opinion: Stock investors haven’t been this bearish in 15 years

Opinion: Stock investors haven’t been this bearish in 15 years

CHAPEL HILL, N.C. (MarketWatch) — Bearishness has reached an extreme not seen at least since the top of the Internet bubble in early 2000. 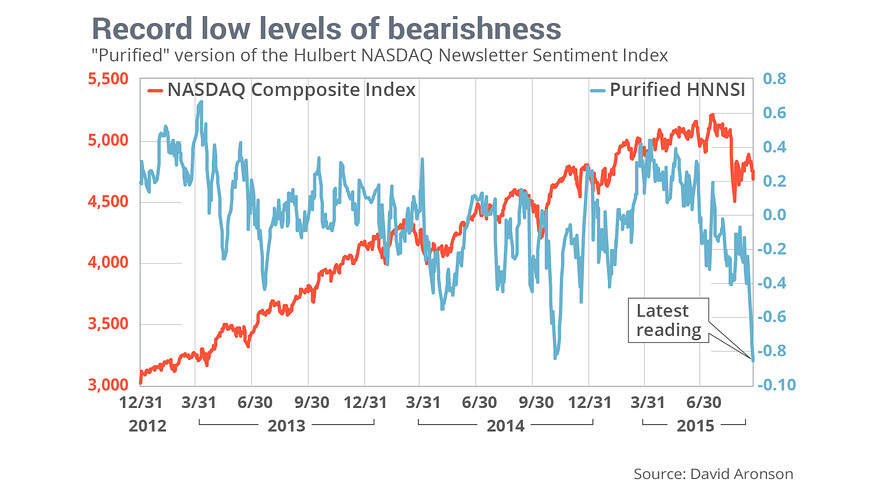 Yet this is a bullish omen, according to the inverse logic of contrarian analysis: Extreme levels of bearishness indicate that there is a very robust “wall of worry” for the market to climb.

These at least are the conclusions that emerge upon analyzing the average recommended equity exposure among a subset of Nasdaq-oriented market timers (as measured by the Hulbert Nasdaq Newsletter Sentiment Index, or HNNSI). Since the Nasdaq responds especially quickly to changes in investor mood, and because those timers are themselves quick to shift their recommend exposure levels, the HNNSI is the Hulbert Financial Digest’s most sensitive barometer of investor sentiment.
What particularly stands out about the latest HNNSI readings is not that it’s low, though it is. What’s noteworthy is that its current level is a lot lower than where we would otherwise expect it to be, given the market’s recent action.

Investing for income with rates stuck at zero (4:17)
Priscilla Hancock, the global fixed income strategist at JPMorgan, makes the case for municipal and high-yield bonds but warns that investment-grade corporate bonds could face headwinds.

Credit for analyzing sentiment from this perspective goes to David Aronson, a former finance professor at Baruch College in New York who now runs a website, TSSBSoftware.com, that makes complex statistical tests available to investors. He refers to what emerges from his approach as a “purified” version of the sentiment index, and reports that this adjusted version has a markedly better track record than the unadjusted one.

Right now, Aronson told me in an interview, the purified HNNSI is at the lowest level ever since data became available in early 2000. In fact, the purified HNNSI is now significantly lower than where it stood in August; that’s noteworthy because — as I wrote at the time — the raw, unadjusted HNNSI was already at the lowest level in five years. But, Aronson explains, those low August readings were not as remarkable as they otherwise seemed, given the stock market’s turmoil in prior weeks.

Just the reverse is the case with the current reading, which indicates an even more extreme level of bearishness.

The extreme bearishness we’re now experiencing suggests that the market will pass its retest of its late-August low.

To be sure, the purified HNNSI’s record low doesn’t guarantee that the market will immediately rally. As Aronson also points out, sentiment often will hit its low before the market does. So, even if contrarian analysis is ultimately right about the current market, it could still be that the correction’s ultimate low is ahead of us.

But, on the assumption that contrarians do get it right, the extreme bearishness we’re now experiencing suggests that the market will pass its retest of its late-August low.