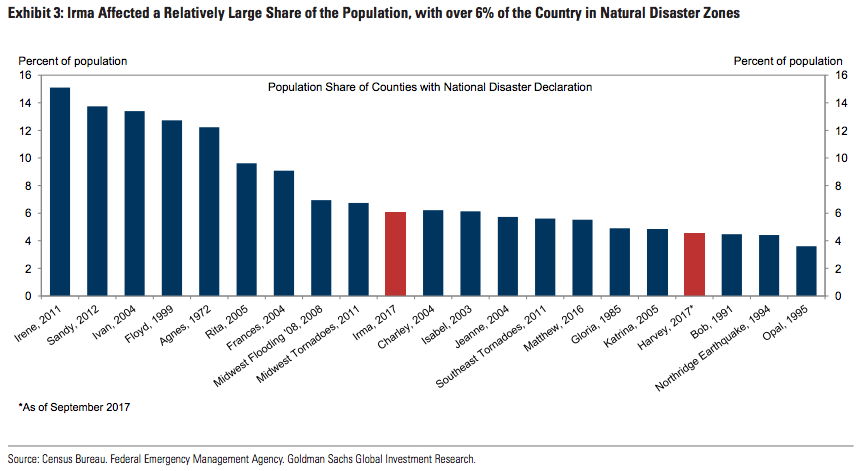 The firm now sees GDP expanding by 2% during the period, down 0.8 percentage points from its previous forecast.

Goldman currently estimates that Hurricane Irma will result in $30 billion in total losses, adding to the $85 billion of damage already caused by Hurricane Harvey, which rocked the city of Houston last month.

“The uncertainty around all of these figures is high, but there is little doubt that the combined impact of Harvey and Irma will be particularly severe,” Spencer Hill, an economist at Goldman, wrote in a client note. “We continue to expect a sizeable drag from hurricanes on Q3 growth.”

One way that Goldman measures how a natural disaster will affect economic growth is by assessing the share of the population that’s ultimately impacted. At present time, Hurricane Irma has affected 6.1% of the populace, making it the 10th-most impactful natural disaster in US history by this measure. That makes Irma’s effects even more widespread than Hurricane Katrina in 2005 and last month’s Hurricane Harvey. Hurricane Irma has affected more than 6% of the population of the US, making it the 10th-most widespread natural disaster in the nation’s history. Goldman Sachs

“While property losses and evacuations do not directly enter the GDP accounting, major hurricanes and natural disasters have nonetheless been associated with a near-term slowdown in many major growth indicators,” Hill wrote. “We believe the huge property losses and relatively broad-based societal footprints of Hurricanes Harvey and Irma suggest a relatively large impact on near-term growth.”

So which areas will be most adversely affected? Goldman predicts that consumption, inventories, housing, and the energy sector will suffer the most.

For energy in particular, the post-hurricane implications for oil demand could reduce GDP. Meanwhile, the sheer number of people impacted by both disasters will surely weigh on consumption, the firm says, highlighting that just five out of 403 Walmart stores in Florida were open on Monday morning.

Treasury Secretary Steve Mnuchin weighed in on the potential GDP effect in an interview with CNBC on Tuesday, agreeing that the measure will take a hit in the short run, but argued that “we will make it up in the long run as we rebuild.”

As more information comes in, keep in mind that Goldman’s GDP forecast is a moving target. Its estimates and inputs could change at any time, most notably if damage totals shift in any meaningful way.

In their words: “If Irma’s damages are significantly higher — or if Florida flooding continues to weigh on consumer spending and housing/investment activity into late September and October — we would expect additional downside to near-term growth.”