6 Gold Statistics That Will Blow You Away 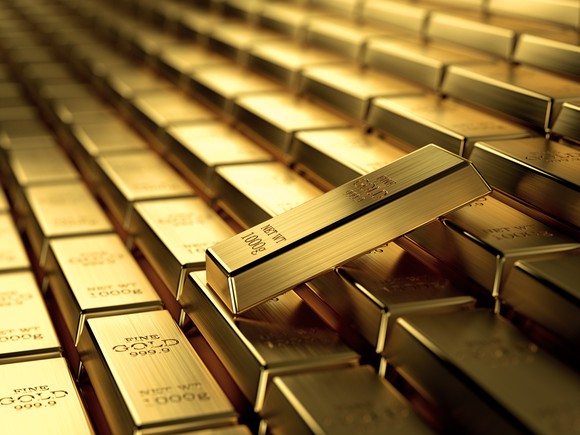 6 Gold Statistics That Will Blow You Away

The gold market is both massive and minuscule, depending on one’s perspective.

Gold is an incredibly rare element, which is what makes it so valuable. In fact, it’s rarer to find a 1-ounce gold nugget than it is to find a 5-carat diamond. That rarity certainly shines through in the following six gold stats, which portray the vastness of the gold market before melting it down into a more personal context, showing the immense value gold packs into such a small space.

America hoards more gold than any other nation

The United States government has 8,133.5 metric tons of gold in vaults across the country, about half of which is at Fort Knox. That’s more than any other nation in the world. In fact, not only are the country’s reserves more than double those of the next largest gold-hoarding nation, Germany, but America also has more gold reserves than the next four largest holders of gold combined.

But that isn’t as much gold as you may think

While 8,133.5 metric tons of gold sounds like a lot, it’s not when viewed from a more personal context. For example, there are 32,150 Troy ounces in one metric ton, meaning America has roughly 261.5 million Troy ounces of gold in reserve. For perspective, the country’s total population is 319 million, so that’s less than an ounce per person. Though if we exclude the kids, we have enough gold in reserve so that every adult can have about 1 ounce apiece.

Another way to put America’s gold reserves into context is to compare it to global gold production. In 2015, global gold miners produced a record 3,155 metric tons, or about a third the size of America’s reserves. The leading producer was Barrick Gold which produced 6.12 million ounces of gold that year. That was a tiny fraction of Barrick Gold’s resources, which are the largest among miners at an estimated 91.9 million ounces. That’s more gold reserves than any other nation, except for the U.S. and Germany.

America’s reserves are worth a mind-blowing amount

America’s gold reserves are very valuable. At the current price of roughly $1,200 an ounce, the country’s 261.5 million-ounce stockpile is worth about $314 billion. Given our current population, that’s around $1,000 for every person in the country, which is a lot of money, considering that nearly 70% of the nation has less than that amount sitting in their savings account.

But that’s actually not much money

However, in the grand scheme of things, it’s pocket change. Take the country’s national debt, for example, which at last check clocked in at nearly $20 trillion. That works out to more than $61,500 per U.S. citizen. In fact, America’s national debt is more than twice the size of the entire gold market.

The gold market is massive

Superinvestor Warren Buffett did an excellent job putting the size of the gold market into perspective in his annual letter to shareholders in 2011:

Today the world’s gold stock is about 170,000 metric tons. If all of this gold were melded together, it would form a cube of about 68 feet per side. (Picture it fitting comfortably within a baseball infield.) At $1,750 per ounce — gold’s price as I write this — its value would be about $9.6 trillion. Call this cube pile A.

Let’s now create a pile B costing an equal amount. For that, we could buy all U.S. cropland (400 million acres with output of about $200 billion annually), plus 16 ExxonMobils (the world’s most profitable company, one earning more than $40 billion annually). After these purchases, we would have about $1 trillion left over for walking-around money (no sense feeling strapped after this buying binge). Can you imagine an investor with $9.6 trillion selecting pile A over pile B?

Buffett melts the gold market down to a single understandable object, which as he points out could fit comfortably within a baseball diamond. On the one hand, that’s pretty small, but on the other he does point out that this cube would could buy up all America’s farmland plus the world’s most profitable company several times over with room to spare. While Buffett would rather take the cash-flowing investments gold could buy over owning the cube itself, the fact is there’s a lot of value packed into this precious metal.

But there’s not much to go around

That said, there’s not a whole lot of gold compared with he population. Currently, roughly 7 billion people are living on this Earth, but there are just 170,000 metric tons of gold. That means that there’s enough gold so that everyone on the planet can have about 24 grams of it, or about what it would take to make five golden rings, bringing a whole new meaning to the song “12 Days of Christmas.”

The gold market is both amazingly large and stunningly small, depending on how you look at it. On one hand, there’s a tremendous amount of value packed into the shiny metal. But the reason it packs so much value per ounce is that there’s precious little of it in the world. That scarcity could continue to drive up the value of gold as more people stake their claim in the precious metal.