2015 Is Turning Out to Be a Terrible Year for Investors

2015 Is Turning Out to Be a Terrible Year for Investors

For investors around the world, 2015 is turning into a year to forget. Stocks, commodities and currency funds are all in the red, and even the measly gains in bonds are being wiped out by what little inflation there is in the global economy.

Rounding out its steepest quarterly descent in four years, the MSCI All Country World Index of shares is down 6.9 percent in 2015 including dividends. The Bloomberg Commodity Index has slumped 16 percent, while a Parker Global Strategies LLC index ofcurrency funds dropped 1.8 percent. Fixed income has failed to offer much of a haven: Bank of America Corp.’s global debt index gained just 1 percent, less than the 2.5 percent increase in world consumer prices shown in an International Monetary Fund index.

After three years in a virtuous cycle of rising share prices and unprecedented monetary easing, markets are now sinking as emerging economies from China to Brazil weaken and corporate profits slump. Analysts have cut their global growth estimates for 2015 to 3 percent from 3.5 percent at the start of the year, and the turmoil has added pressure on central banks to prolong their stimulus programs, with traders scaling back forecasts for a Federal Reserve interest-rate increase by year-end.

“There was an element of people believing they had found some sort of holy grail to investing, then this breakdown occurs and it breaks down in a way that’s remarkable,” said Tobias Levkovich, Citigroup Inc.’s chief U.S. equity strategist. “What seemed to trigger this all was China. It sent us on a wave of downward fears.” 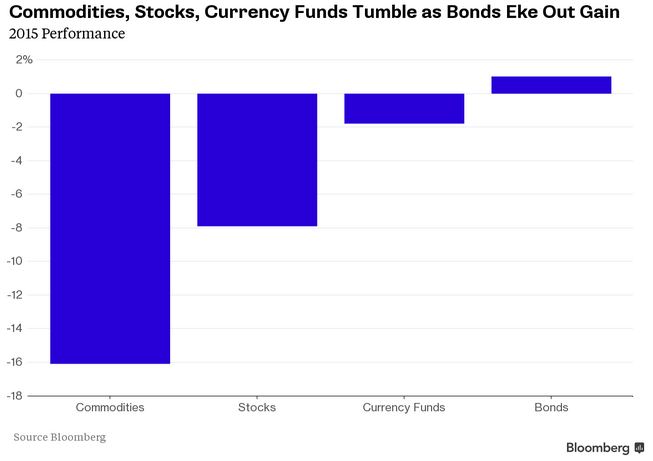 Investors suffered the brunt of this year’s losses in the third quarter.

MSCI’s global equity index sank about 10 percent in the period, while the Bloomberg commodity index lost 14 percent in its biggest slump since the global financial crisis seven years ago. The average level of Bank of America’s Market Risk index, a measure of price swings in equities, rates, currencies and raw materials, was the most this quarter since the end of 2011. The Chicago Board Options Exchange Volatility Index, a gauge of turbulence known as the VIX, reached the highest since 2011 in August.

China has been the biggest source of anxiety for investors, after turmoil in the nation’s financial markets fueled concern that the country’s worst economic slowdown since 1990 was deepening. The Shanghai Composite Index fell 29 percent in the third quarter, the most worldwide, and the yuan weakened 2.4 percent after authorities devalued the currency in August.

That sent a shudder around the world.

The worst quarter in seven years for the Bloomberg JP Morgan Asia Dollar Index, which tracks the region’s 10 most-active currencies outside of Japan, has pushed it down 5.1 percent this year to the lowest levels since 2009. A similar measure for Latin American currencies tumbled to a record.

Even those investors speculating on dollar strength have found trades upended by the yen’s 2.3 percent rally in the third quarter and a revitalized euro.

“This is going to go down as one of the worst quarters in a while,” said Michael Antonelli, an institutional equity sales trader at Robert W. Baird & Co. in Milwaukee. “It all kicked off from a China slowdown concern and has unraveled piece by piece.”

In the U.S., the Standard & Poor’s 500 Index has dropped 7.8 percent since the end of June as companies reported a 1.7 percent slump in second-quarter earnings and cuts to analyst profit estimates outnumbered increases for 17 straight weeks.

Commodity producers are to blame for a big portion of those reductions after Brentcrude oil fell below $50 a barrel on the highest OPEC output in seven years. Copper touched a six-year low, while platinum fell 15 percent in the quarter. The precious metal, used in devices that curb harmful emissions from cars, bore the brunt ofVolkswagen AG’s attempts to rig pollution tests for U.S. diesel engines. Glencore Plc, the commodities group that’s become a proxy for the industry’s woes, plummeted 69 percent year-to-date on the London Stock Exchange.

Credit markets haven’t been excluded from the losses. The BofA Merrill Lynch Global Corporate & High Yield Index is set for its first annual decline since 2008, with yields approaching the highest since 2012. Government bonds returned just 1.4 percent in an environment of strong demand for haven assets.

For all the turbulence, the U.S. economy is still “pretty solid” and the Fed should raise interest rates, Howard Marks, the co-chairman of Oaktree Capital Group LLC, said at a conference in Toronto on Tuesday. A rate increase of 25 basis points, or a quarter of a percentage point, won’t be “that big of an event” after the Fed held borrowing costs near zero on Sept. 17, said Marks, whose firm is the world’s biggest manager of distressed debt.

The “phantom rate hike” this month has only added to market volatility, according to Tony Crescenzi at Pacific Investment Management Co.

Traders in the futures market have been pushing back forecasts for Fed liftoff. They’re pricing in a 41 percent probability the Fed will raise its benchmark rate by a quarter percentage point by the Dec. 15-16 meeting, down from 60 percent at the end of August. The European Central Bank and the Bank of Japan haven’t ruled out extending their stimulus programs, while forecasters including HSBC Holdings Plc predict China will cut banks’ reserve ratios to bolster economic growth.

“More and more people will expect the Fed to postpone tightening this year if these very fearful conditions continue,” said Kei Katayama, a money manager in Tokyo at Daiwa SB Investments, which oversees $48.5 billion.

For Cristian Maggio, London-based head of emerging-markets research at Toronto Dominion Bank, a slide in developing-nation assets may not be over.

Emerging-market stocks dropped the most in four years in the third quarter, while local-currency sovereign bonds retreated 3.4 percent. Brazil’s real tumbled to a record low in September as the nation’s credit rating was cut to junk by Standard & Poor’s.

“Longer-term, we still see fundamental reasons for weakness,” said Maggio. “The selloff looks overdone, and I expect this extreme pessimism to correct somewhat in the near term. But markets will have to believe that the selloff of emerging market currencies has gone too far. Poor sentiment and panic selling can be self-fulfilling.”