Will Gold Shine On? 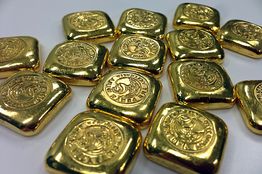 Will Gold Shine On?

Gold is getting off to a good start this week. With the U.S. dollar wobbling and lingering worries about trade policies and economic growth, the precious metal climbed in recent market action.

Gold had a bad time in the weeks after the 2016 presidential election in November. President Donald Trump’s victory prompted a rally in the dollar, U.S. stocks, and riskier financial assets. The decision by the Fed to raise interest rates in December further pressured the metal, and central-bank officials indicated they may raise rates another three times in 2017.

But as Barron’s noted this past weekend, analysts expect a comeback for bullion as the market focuses on political and economic risks with the presidential transition.

We expect the gold market will view Mr. Trump’s words differently now that he is President. The Economist daily dispatch makes the point that when a president speaks, no easy distinction is to be made between word and deed. An off-the-cuff comment, even if not meant literally, from a president has the power to move markets. Comments that may raise uncertainty or geopolitical risk are also likely to boost gold.

We have commented before that President Trump’s cabinet and his agenda have two broad themes, one is likely to be gold-bullish, the other gold-neutral or possibly bearish. One faction of his economic team are traditional republicans who broadly favor free trade and tax cuts. Their impact on gold, all other things being equal, would be neutral or maybe bearish. Another group may be described as economic nationalists and favor protectionism of one sort or another and greater fiscal spending. Their policies would be gold-bullish. On balance, we believe the Trump Administration is bullish for gold. But the market needs either words or deeds from the team before it can move decisively one way or another. This may take time, but if gold hangs on every word from the Administration, prices could be volatile.