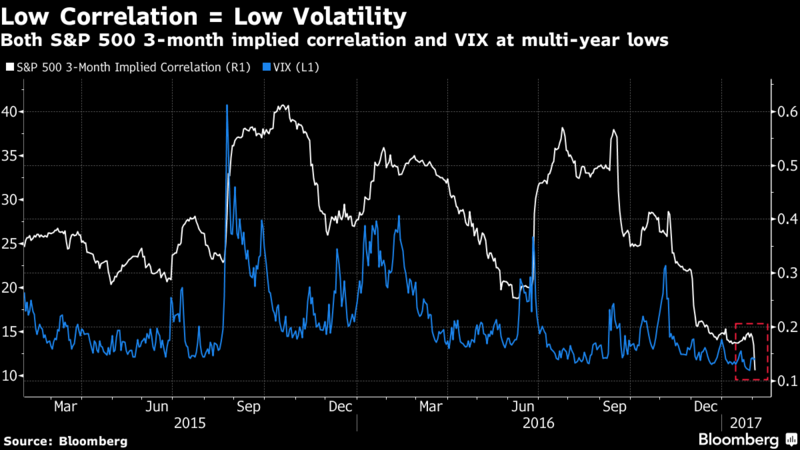 Correlation, it’s sometimes said, equals volatility. An index can’t swing very much unless a lot of its members are going the same way.

So if you’re wondering why the CBOE Volatility Index has been so quiet lately, that’s part of it, according to Dean Curnutt, chief executive officer at Macro Risk Advisers. Stocks are charting independent courses under Donald Trump, and it’s holding broad measures of turbulence down.

S&P 500 Index realized correlation now sits close to the lowest level on record, according to data compiled by Bloomberg. A five-point reduction in the correlation of stocks in an index translates to a one-point decline in the gauge’s volatility, according to Curnutt.

“Since the election, certain sectors like financials and industrials have done well, while others have lagged, and they kind of cancel each other out, resulting in lower volatility,” said Matt Friedman, senior vice president of options trading at Convergex Group LLC, in New York. “Whereas when correlations are very high, you tend to see pullbacks in the market, which coincides with spikes in volatility. It’s all related.”

With equities hovering close to records, traders seem impervious to risk, even as new policies from President Donald Trump stir up discord. One-month realized volatility on the S&P 500 was 6.51 in January, only the fifth time since 1928 that a year has begun so calmly.

Despite lots of evidence the peace is related to improving economic expectations, the tranquility continues to strike some people as weird. One thing they cite is a measure of global policy uncertainty that has gotten more extended versus the fear gauge than at any point in the past two decades. The volatility index also sits at the lowest since the start of 2015 relative to expected price swings in the Chinese yuan-U.S. dollar cross.

“We have a new president who’s completely unorthodox, yet the market’s not moving,” says Curnutt, whose firm is paid to arrange volatility trades. “It’s a challenging time for investors because they see all these risks, but the market is waving them off.”

Curnutt has been recommending clients consider short-term hedges at such low prices. While President Trump has spurred a rally in financials and industrials, investors should be prepared in the event that he doesn’t follow through, according to Curnutt. He also notes that the biggest VIX spikes of the past five years came on the heels of large moves in China’s yuan.