Traditional banks may be in trouble due to digital banking 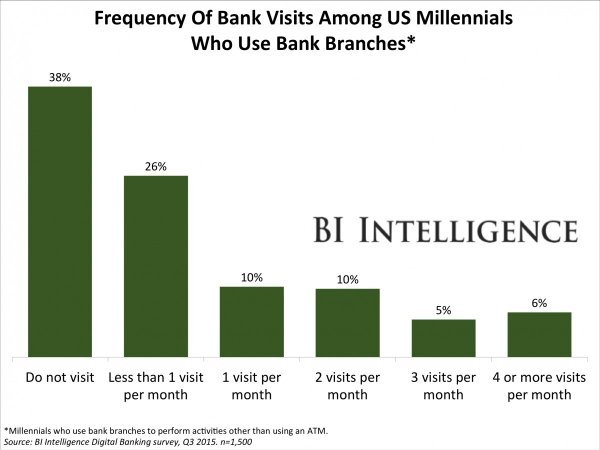 Traditional banks may be in trouble due to digital banking

More millennials are moving toward digital banking, and as a result, they’re walking into their banks’ traditional brick-and-mortar branches less often than ever before.

This generation accounts for the greatest share of the U.S. population at 26% and the employed population at 34%, so it’s easy to see why their behaviors and preferences will have a profound effect on the future of the banking industry, particularly with regard to the way banks interact with their customers.

Third parties are expanding their role in providing services that consumers use to manage their money. And the more that role grows, the more it will disrupt the relationship between banks and their customers.

To paint a clearer picture of the future of the banking industry, John Heggestuen, managing research analyst at BI Intelligence, Business Insider’s premium research service, surveyed 1,500 banked millennials (ages 18-34) on their banking behaviors and preferences — from their preferred banking devices, to what banking actions they perform on those devices, to how often they perform them.

All of that rigorous research led to an essential report entitled The Digital Disruption of Retail Banking that dives deep into the industry and details what its future will look like.

Here are some of the key takeaways from the report: