This is why U.S. investors should be worried about China 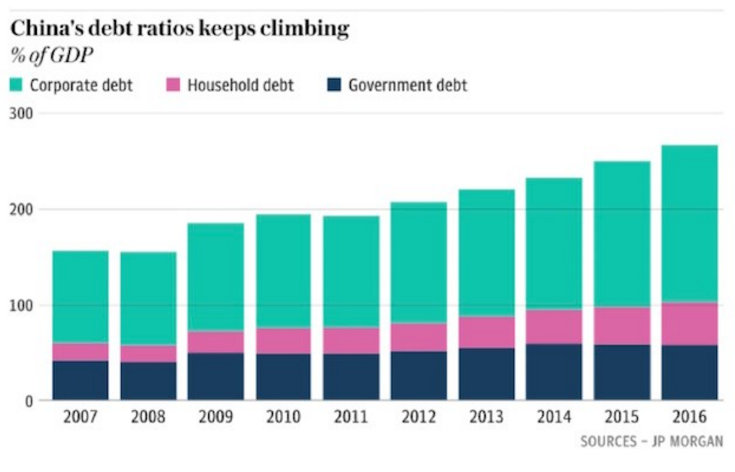 This is why U.S. investors should be worried about China

We are 10 years on from the beginning of the credit crisis, but are seeing many of the same signs of hubris that were present then. However, one thing that is definitely different is the shadow that China now casts over the global economy.

In 2008 China announced a massive stimulus package that helped its economy and the global economy weather the storm. But nearly 10 years later, the situation is very different and China could shift from being a big contributor to global growth to an anchor slowing down the global economy.

The 2015 McKinsey report “debt and (not much) deleveraging” laid out how global debt levels have risen since the crisis. It highlighted three areas of particular concern; sovereign debt, consumer debt and China. However, as shown in the graphs below, the growth in Chinese debt levels is drowning out progress made in other countries, which have as a group reduced their debt levels. When China is excluded, there has been meaningful deleveraging in global bank, corporate and consumer debt since 2009.

Another factor that makes China’s debt growth extraordinary is the pace and length of the expansion. Arguably the best indicator of future debt issues for anyone (corporate, individual or government) is when the debt is growing much faster than the income used to make repayments. When talking about an economy as a whole, the IMF measures this using the credit-to-GDP gap.

The chart below is particularly busy, but concentrate on the blue line. It shows that China’s debt has been growing way above sustainable levels since mid-2013. To maintain its high levels of GDP growth, China has had to use an enormous amount of debt stimulus.

Further demonstrating how record-setting China’s credit growth has been is the following graph. This chart excludes government debt, focusing just on private-sector debt. Note the near-vertical rise in China’s debt levels that mirror the experience of Thailand and Spain in the lead-up to their credit-induced bubbles. Note also the comparison with Canada and Australia, which are both frequently cited as having excessive household debt and house prices.

This time is very much different for China. No other emerging market has reached such extraordinary levels of debt. Chinese institutions and investors are mostly amateurs with a track record of investing in unproductive assets. Default rates are kept artificially low as extend-and-pretend lending is commonplace. A generation of investors have seen nothing but good times and only fear missing out on more. The potential for losses is given little consideration other than the expectation that the government will bail out everyone if losses occur.

It is now a question of when, not if for China.

China’s government believes it can reduce leverage while maintaining high levels of growth but there’s no precedent for this. China’s companies have dominated their domestic markets due to trade barriers but have struggled overseas. China now appears to be hitting a limit on growth from exports as other Asian nations undercut it on price and developed nations fight back against its hypocritical stance on “free trade”. If credit growth stops China’s growth will stop, with recession a foreseeable prospect.

In the last crisis, China’s stimulus helped lift commodity prices and equities around the world, including the S&P 500 SPX, -0.31%   and the Dow Jones Industrial AverageDJIA, +0.11% But a Chinese recession now would do the opposite.

Given the size of its economy and its outsize contribution to global GDP growth, it could export a recession to other countries. And that would be very bad for investors everywhere.

Jonathan Rochford is a portfolio manager at Narrow Road Capital, which specializes in high-yield and distressed credit. This is adapted from “For China, this Time is Different.”