On a day when the Dow Jones Industrial Average touched 19,000 for the first time in history, investors would be forgiven for asking themselves if the shine has come off gold as a safe-haven investment.

The price of gold has breached the psychologically important $1,200 per ounce level after reaching an all-time high of over $1,800 in 2011, as the chart courtesy of the St. Louis Federal Reserve Bank shows. Over the last 10 years, this price level has been an important area of support and resistance as gold first rallied following the great economic recession in 2008 and 2009 but then sold off from 2011 when inflation failed to materialize in the global economy. 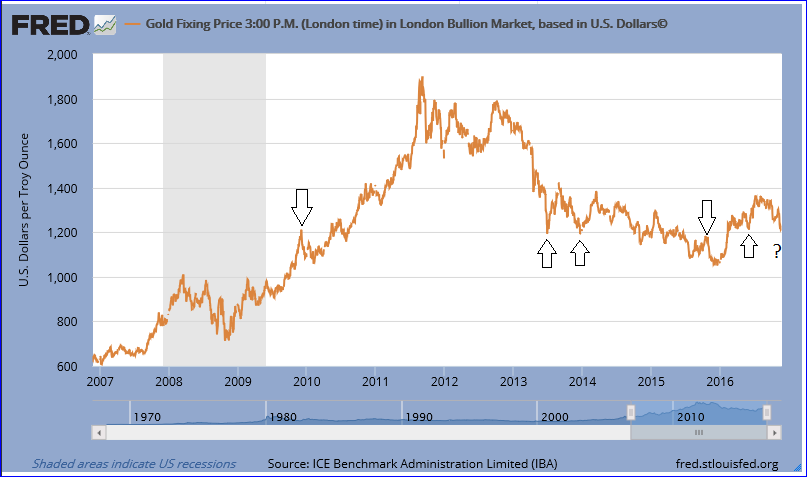 The key question is whether the drop will continue. It is possible for gold to return to the previous 2015 lows of $1,050 before finding another solid support level.

One of the factors affecting gold is the value of the U.S. dollar, which is influenced by the level of interest rates in the U.S. economy (among other things). As American interest rates rise, U.S. dollar denominated assets become more attractive as investments because investors are able to earn a greater return on their money. Gold, on the other hand, doesn’t pay dividends or interest. Its value depends solely on its price. If more attractive investments are available elsewhere, gold tends to be replaced in investors’ portfolios. Traditionally, gold is a “safe haven” asset that investors turn to in bad times when other assets are under-performing. (See also: Is Trump The Next Reagan? Investors Better Brace Themselves.)

The next meeting of the Federal Open Market Committee (FOMC) is scheduled in December and investors expect interest rates to increase following that meeting. As an example, the Fed Funds Futures market is currently pricing in a 100% chance of an interest rate hike at that time. In the meantime, yields on U.S. Treasury bonds are also rising from higher U.S. inflation expectations next year. These higher yields means investors are able to earn better investment returns from traditional assets. As a result demand for gold is dropping and taking the price down.

Disclaimer: Gary Ashton is an oil and gas financial consultant who writes for Investopedia. The observations he makes are his own and are not intended as investment advice.
Credits