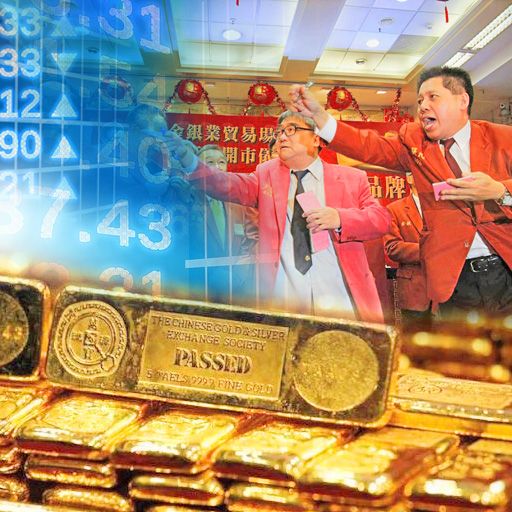 From BullionStar: Financial market prices are generally set by the trading venues which command the highest trading volumes and liquidity. This is also true of the gold market where the venues with the highest gold trading volumes – the London over-the-counter and COMEX gold futures markets – establish the international gold price.

However, these two gold markets merely trade paper gold claims in the form of unallocated gold positions (London Gold Market) and gold futures derivatives (COMEX). This trading creates paper gold supply out of thin air and is also highly leveraged and fractional in nature since the paper gold claims are only fractionally backed by real physical gold.

Although these highly leveraged synthetic gold trades have nothing to do with the transacting of physical gold, perversely they still establish the international gold price because physical gold markets merely inherit the gold prices derived in these ‘high liquidity’ paper gold markets.

Each trading day in the London OTC gold market, the equivalent of a staggering 6500 tonnes of gold is traded.

To put this into perspective, less than 7500 tonnes of physical gold vaulted in the entire London gold vaulting network, most of which is owned by central banks and Exchange Traded Funds.

Likewise, on the COMEX futures exchange during 2017, only 1 in every 2650 gold futures contracts actually reached delivery via a transfer of underlying gold. The remainder (99.96%) of gold futures are cash-settled. There is very little physical gold backing COMEX gold trading i.e. Registered physical gold inventories in COMEX approved gold vaults represent only a tiny fraction of the total volume of gold futures traded at any given time.

Conversely, real physical gold is a tangible asset that exists in limited quantities, it is inherently valuable, difficult to produce, difficult to counterfeit, and most importantly when held in the form of fully allocated, segregated and unencumbered gold bars and gold coins, it has no counterparty risk and so is no one else’s liability.

But given the dominance of gold pricing by the paper gold markets, can this situation continue, and if so for how long?

BullionStar would contend that this situation can only continue while the bulk of paper gold market participants are happy to continue trading paper gold claims and in the absence of a shock to the physical gold demand-supply balance.

These flows of physical gold from West to East have been ongoing for some time and can even be viewed as a slow and silent bank run on the physical gold market.

Classic commercial bank runs either begin when a subset of a bank’s customers suspect that the bank may not have sufficient liquid cash to repay all depositors, or else suspect that the bank’s loan base has soured. Since commercial banks employ fractional reserve banking where only a fraction of depositors’ money is kept in reserve (the majority being lent out in the form of loans), depositors with early suspicions begin withdrawing their money first.

Word spreads that the bank is having trouble meeting withdrawal requests and more and more depositors follow suit attempting to make withdrawals. Panic soon sets in with the bank forced to limit withdrawals and request emergency assistance from regulators.

The same end-game could be said to be true of fractional-reserve gold banking where holders of claims on physical gold rush to be the first to convert their claims into physical gold. Since the early 2000s, there has been a continual and substantial flow of physical gold from West to East. For example, since 2001, India has net imported over 11,000 tonnes of gold. This imported gold has for the most part stayed within India.

Likewise, since 2001, China has imported over 7,000 tonnes of gold. Because exports of gold are prohibited from the Chinese gold market, this gold cannot leave China mainland. In addition, the Chinese central bank has reported a 1400 tonne increase in its gold holdings since 2001. This is gold that the People’s Bank of China buys exclusively on international gold markets in the form of wholesale gold bars and imports secretively into China, and is above and beyond reported Chinese gold import figures.

In the global gold market, Eastern buyers of physical gold are analogous to the early depositors of a commercial bank withdrawing their cash. In this scenario, a gold market ‘depositor shock’ prompting further withdrawals from the global stock of gold would be analogous to a widespread realization that the outstanding set of traded gold claims is far larger than the dwindling quantity of physical gold backing those claims. This realization would prompt further rotation out of paper gold into physical gold.

But what would the real price of physical gold be in the absence of the subduing influence of the fractional and limitless paper gold market, or how do we even approach calculating a range of such physical gold prices?

Approximately 190,000 metric tonnes of gold have been mined throughout history. Nearly all of this gold can still be accounted for in one form or another and is known as ‘above-ground gold’. About 90,000 tonnes of this gold is held in the form of jewellery, 33,000 tonnes of gold are (supposedly) held by central banks, 40,000 tonnes are attributed to private gold holders, with the remainder having been used in industrial and other fabrication uses.

While 190,000 tonnes may sound like a lot, at the current gold price of USD 1250 per ounce, all the gold ever mined in the world is valued at less than $8 trillion, and official central bank gold holdings (monetary gold) are valued at just $1.3 trillion. The US Treasury claims to hold 8133 tonnes (or 261.5 million troy ounces) in its official gold reserves (a figure which, by the way, could be far lower since it has never been independently audited). At the current gold price, these US Treasury gold reserves are worth just under $320 billion.

Even at a 40% gold-backing, a backing which was historically in place for the US money supply in a recent period in US monetary history, this would imply a gold price of $27,500 per ounce.

GLD currently has an ETF Daily News SMART Grade of B (Buy), and is ranked #3 of 35 ETFs in the Precious Metals ETFs category.

This article is brought to you courtesy of BullionStar.