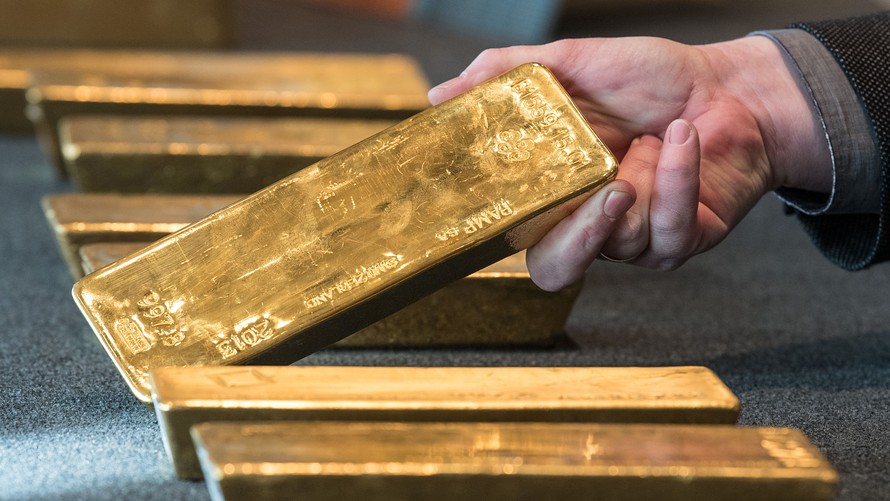 Gold prices fell for a second straight session Thursday even as the dollar eased, pulling back after a five-day run had driven the safe-haven precious metal to five-month highs that failed to clear the closely watched $1,300 mark.

June gold slipped a narrow $1.10, or 0.1%, to $1,282.30 an ounce. It held that modest drop in the wake of a pair of U.S. economic reports. One showed a reduction in a still-high reading on Philadelphia-area manufacturing. The other revealed continued shrinking for the number of people collecting unemployment benefits.

Wednesday’s settlement at $1,283.40 was the lowest for the contract since April 12, according to FactSet data. Prices for the yellow metal initially extended their losses in electronic trading Wednesday afternoon when the Federal Reserve released its largely upbeat Beige Book synopsis of economic conditions, a report that, along with Thursday’s data, support calls for interest-rate hikes this year, typically a drag for nonyielding gold.

The ICE U.S. Dollar Index  fell 0.2% to 99.60. Gold and the dollar broke their typically inverse relationship. A stronger dollar dulls the appeal of dollar-pegged assets for investors using other currencies.

Investors remained nervous ahead of France’s first round of the country’s presidential election on Sunday, as a closely watched poll showed voting is too close to call, though does give centrist Emmanuel Macron the edge to win overall. Global market unrest typically benefits “risk-off” gold.

“Gold remains steady, as traders are reluctant to short the market ahead of this weekend’s first round of French elections,” said Peter Hug, global trading director, with Kitco Metals, in a note.

“Physical buying has been prominent on the continent and in the Far East, as investors remain wary of geopolitical risks with North Korea, but North American demand remains anemic,” he said. “[I] would expect gold to trend firmer into the weekend…as investors digest the outcome of the first round of France’s election.”

British Prime Minister Theresa May’s call on Tuesday for a snap general election in June, a strategic step as she navigates Britain’s exit from the European Union, added to riskier market nervousness, underpinning gold and silver.