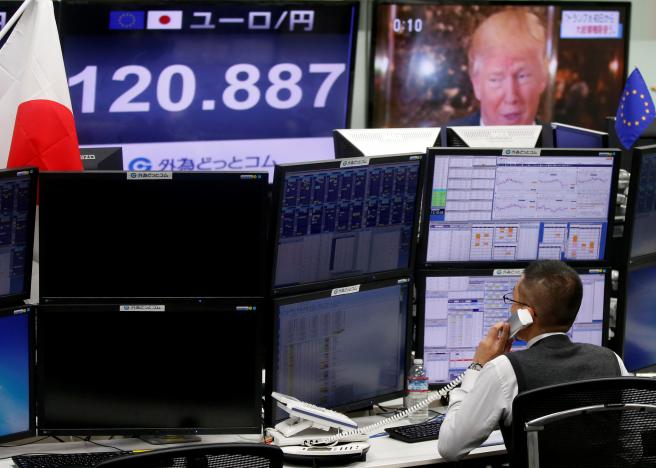 The global economic outlook remains shaky, despite recent pockets of resilience, according to the overwhelming majority of economists polled by Reuters who said a rise in protectionist trade policies would hamper growth.

With elections due in a number of major euro zone countries, political change in the bloc was picked as a close second choice for potential disruptions to the global economic revival.

That uncertainty is heightened by the signs of a rise in nationalist sentiment worldwide, as exemplified by Britain’s surprise vote last year to leave the European Union and Donald Trump’s shock U.S. election victory.

Three months ago, economists overwhelmingly cited a pickup in international trade as essential for improvement in the world economy. But an expected rise in protectionist policies has dented confidence in those prospects.

This trend is reflected in most other Reuters polls over the past month on major economies, stock prices, bond yields and foreign exchange rates.

“Clearly, the geopolitical, political and economic risks facing the world are many and multifarious, and it is no easy matter to isolate those that seem most apparent to us,” wrote Mike Carey, chief economist at CA-CIB in a note.

Reuters polls of over 500 economists across Asia, Europe and the Americas reveal downgrades, or at best no change to growth forecasts compared with previous months, as well as a weaker inflation outlook across most countries.

While the latest poll gave only a 10 percent probability of a global economic recession this year, the main difference this time is that the range of forecasts for global growth showed lower highs and lower lows.

Speculation that Trump will enact bold stimulus and reflationary measures once in office has pushed up U.S. 10-year Treasury yields by around 50 basis points since election day, lit a fire under the dollar and sent U.S. stocks to record highs.

But concerns over his stand on trade are starting to undermine investor sentiment, with the yen – considered a safety bet in uncertain times – back to its highest levels in more than five weeks.

“Maybe a home-grown U.S. wage acceleration is underway, with Trump’s policies acting as a conduit to bring it all about. It’s a nice thought, but we need more substance,” wrote Jan Lambregts, global head of financial markets research at Rabobank.

“Trump’s fiscal plans are as of yet unclear in size, focus and therefore impact. Markets are currently priced for perfection when it comes to Trump’s policies. That’s a lot to ask for.”

Trump’s posture on trade has clouded the outlook for the U.S. economy with rising risks of a trade war with China.

A strong dollar, which hit a 14-year high earlier this month and is up close to 6 percent since the U.S. election result, acts as a drag on the economy by making U.S. exports relatively more expensive as well as damping down import price inflation.

Across the Atlantic, the recent optimism that the euro zone economy is on a more robust growth path has weakened and will only be maintained if there are no major upsets in several national elections there.

While euro zone inflation in December was the highest in 3-1/2 years, the outlook for price growth remained weak. Not a single economist in the poll of more than 60 said they expected inflation to hit 2 percent this year or next.

“QE is failing to lift inflation but the ECB may need to taper, if only to shift pressure back to governments.”

Britain’s inflation rate is expected to soar following sterling’s fall since the Brexit vote. But the economy will dodge a recession this year at least as the Bank of England maintains its ultra-easy policy stance.

Since Trump’s victory, expectations of protectionist policies have driven investors out of emerging markets.

But the latest poll showed Brazil will come out of its worst recession ever this year, albeit very slowly and still leaving millions unemployed.

Despite expectations for sluggish world trade and Trump’s trade policy, China – the world’s second-largest economy – is forecast to grow 6.5 percent this year as the government keeps up policy support.

India, which was one of the few exceptions in emerging markets with a stable outlook, likely lost momentum in the final three months of 2016 after Prime Minister Narendra Modi’s ban on high-value currency notes hurt demand and businesses.